Some basic concepts to start with

In order to build something, you have to place it and then construct it. Every block has a recipe of components such as a Wind Turbine that uses:

Blocks are constructed by their recipe from bottom to top. In order to place a block of a specific type, you must have one of the bottom-most item in your inventory, which is consumed to create the “framework” of the block. This allows you to quickly rough out the structure of something in order to estimate sizes whether things will connect the way you think they will. Then when you want to construct the block, you must have the rest of the components in your inventory and use the welder tool to finish the block.

Complete vs. “Functional” vs. “Hack”

When constructing a block, you will see two lines partway up the list of components. One is a blue line marked “Functional” and one is a red line marked “Hack”. The Functional line is the point where the block performs its intended function, even if it is not complete (or if it has taken damage). The Hack line is the point where a block must be damaged down to in order for another player to change its ownership in PvP.

Because a rough structure can be built by placing a bunch of blocks but not completing them, one can quickly build “scaffolding” by placing a bunch of Light Armor Blocks. This has a lot of uses in the game from being able to quickly construct a simple base, to creating temporary scaffolding to keep blocks in a specific location when one is changing how it is connected to its grid. 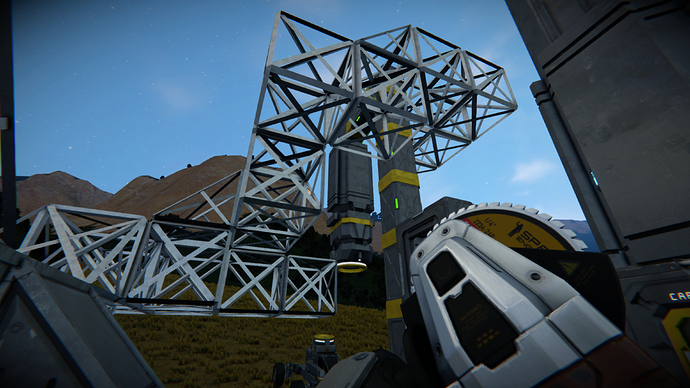 Warning: The only exception to the rule that you get all the components back are batteries of all sizes. The “power cells” components of a deconstructed battery are lost when demolishing it.

This is a question of game balance since batteries, when built, start with 30% charge. If one could retrieve all the components from a battery when deconstructing it, you could build a battery, deplete it, deconstruct it, immediately construct it again, and have your 30% charge back. This would grant infinite free power.